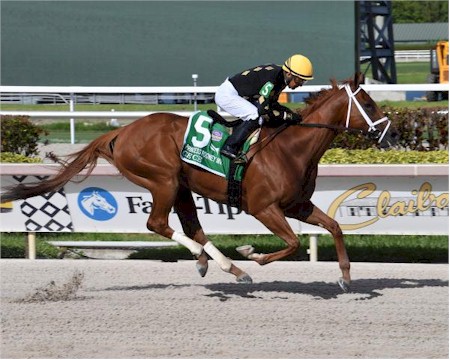 by Mike Welsch DRF.com
July 2, 2022 (Hallandale Beach, FL)-Reigning female sprint champion Ce Ce looked every bit the part when she returned to Gulfstream Park on Saturday to successfully defend her title in the Grade 2 Princess Rooney with a 6 1/2-length victory over Spirit Wind.

The victory earned her an expenses-paid berth back to the Breeders’ Cup Filly and Mare Sprint at Keeneland on Nov. 5.

Ce Ce sewed up divisional honors winning the BC Filly and Mare Sprint last fall at Del Mar. She launched the second half of her championship season rallying to a 3 1/4-length triumph in the seven-furlong Princess Rooney, and she was arguably even more impressive the second time around.

Ce Ce rated four lengths off the early pace set by Make Mischief while kept out in what appeared to be the better footing well off the rail by her regular rider Victor Espinoza. Ce Ce was roused to commence her bid while remaining wide approaching the stretch, overtook leader Spirit Wind once turning into the lane, then steadily increased her advantage while kept under a mild hand ride.

Spirit Wind, the only 3-year-old in the field, eased back off Make Mischief while forcing the pace down the backstretch before angling off the rail and sticking her head in front at the three-furlong marker. Spirit Wind remained wide exiting the bend and continued gamely to be second. Make Mischief finished third.

Trainer Michael McCarthy said by phone from California that Make Mischief and Spirit Wind putting pressure on each other benefitted Ce Ce.

“We wound up sitting a dream trip outside the speed,” said McCarthy. “It appeared like the track was better away from the rail and it seemed like it was good wherever she was.”

McCarthy said he doesn’t have enough superlatives to describe his feelings for Ce Ce.

“She just keeps on validating the belief I have in her every time,” said McCarthy. “And she seems like she’s bigger and even stronger this year as a 6 -year-old.”

McCarthy said he’ll likely follow “the same recipe that worked for us last year” getting Ce Ce back to the Filly and Mare Sprint in November. Last year, Ce Ce had two races between the Princess Rooney and the Breeders’ Cup, finishing third in the Grade 1 Ballerina at Saratoga and winning Grade 3 Chillingworth Stakes at Santa Anita.