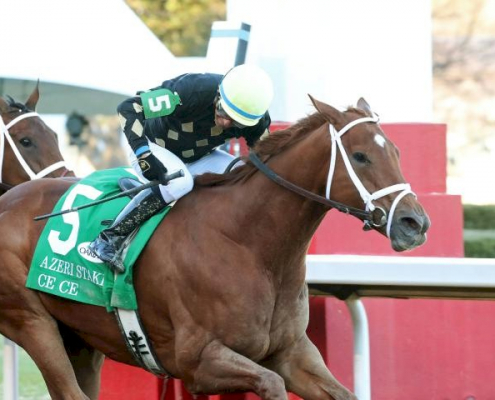 Mary Rampellini, DRF.com
March 12, 2022 (Hot Springs, AR)The reigning champion female sprinter Ce Ce made the move back to two turns for the Grade 2, $350,000 Azeri on Saturday at Oaklawn Park and was a three-quarter-length winner over Pauline’s Pearl in a three-horse battle to the wire.

It was another length back in third to even-money favorite Shedaresthedevil.

The Azeri is the final local prep for the Grade 1, $1 million Apple Blossom Handicap on April 23 at Oaklawn, a race Ce Ce won in 2020. Trainer Michael McCarthy said Saturday following the Azeri that plans going forward for the champion would be determined.

“We’re going to enjoy this and figure things out in the next 24 hours or so,” McCarthy said.

The Apple Blossom now has the potential to become a showdown between two champions and two past winners of the race as trainer Fausto Gutierrez told Daily Racing Form in February it is a target for last year’s winner, champion Letruska.

Ce Ce ($5.40) focused on one-turn races last year and won the division’s ultimate prize, the Breeders’ Cup Filly and Mare Sprint in November at Del Mar. She started her season last month and was second in the Grade 2 Santa Monica over seven furlongs at Santa Anita.

Ce Ce on Saturday was content to settle off the pace in fourth as Shedareesthedevil took the field through fractions of 23.44 seconds for the opening quarter, 47.53 for the half-mile and 1:12.20 for six furlongs. Ce Ce advanced, moved to the fore in the stretch, briefly appeared to lose momentum, then battled back to go on and cover 1 1/16 miles on a track upgraded to fast after the fifth race in 1:43.55.

“It was just a gritty performance,” McCarthy said. “That’s what champions do – leave it all out there.”

Victor Espinoza was aboard Ce Ce and he regularly rides the homebred for Bo Hirsh.

“I wanted to take the lead a little bit farther down the stretch, it just happened so quick,” Espinoza said in an interview broadcast by Oaklawn. “The last sixteenth, she could hear all that [crowd] noise and just started to put the breaks on on me. The horses came to me, and she just started running again.”

The ontrack crowd Saturday was an estimated 30,000, according to Oaklawn.

“Ce Ce hadn’t run the distance for so long and she nailed it today,” Espinoza said.

The start around two turns was the first since last May for Ce Ce.

Ce Ce has now won 9 of 18 starts. The victory in the Azeri pushed her just over $2 million in career earnings. She is a daughter of Elusive Quality.

Pauline’s Pearl was a charging second one start after winning her first race against older rivals in the Grade 3, $400,000 Houston Ladies Classic in January at Sam Houston.

Shedaresthedevil fought back in the stretch when making what was her first start since finishing sixth in the Breeders’ Cup Distaff in November. She is a multiple Grade 1 winner and last year she won the Azeri.

The remaining order of finish Saturday was She’s All Wolfe in fourth, followed by Ava’s Grace, Golden Curl and Lady Mystify. Lavender, who is entered in a Friday allowance at Oaklawn, was scratched, as was Super Quick.