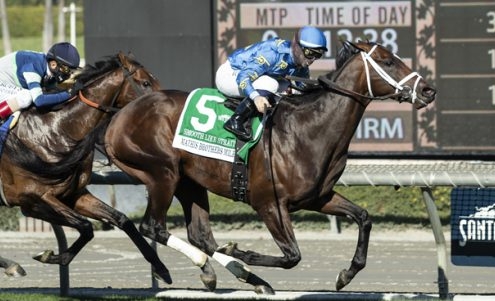 Ridden by Umberto Rispoli, Smooth Like Strait got one mile on turf in 1:33.51 while posting his fourth win from seven starts this year.

Winless in seven races since winning the Grade I Breeders’ Cup Juvenile here on Nov. 1, 2019, Peter Eurton’s Storm the Court proved very tough on the lead and gave way to the winner grudgingly late.

“We knew Storm the Court would be going for the lead, so I just wanted to sit back of him,” said Rispoli, who has now won two of his last three races aboard Smooth Like Strait. “We got the perfect trip…When it came time to ask him in the stretch, he was ready to go.”

A winner of Santa Anita’s Grade II Twilight Derby at a mile and one eighth on turf two starts back, Smooth Like Strait came off a close second place finish in the Grade I Hollywood Derby going the same distance at Del Mar Nov. 28 and was off at 4-5 in a field of seven sophomores, returning $3.60, $2.60 and $2.20.

“I was surprised at how well he came out of the Hollywood Derby,” said McCarthy. “He put in a couple of works that were I thought maintenance type works, but everything he was showing me in the morning, and the way he was acting around the barn (indicated he was ready to run). I thought about it for a couple of days whether we should go or wait until March…But he acted like he had his mind on running today and I’m glad we got him over here.”

Storm the Court, ridden for the first time by John Velazquez, held second by a half length over English-bred Whisper Not. Off at 10-1, Storm the Court paid $6.40 and $4.00.

The second choice at 5-2 with Joel Rosario, Whisper Not out-finished Field Pass by a head and paid $2.80 to show.