Arcadia, CA (October 18, 2020)-Smooth Like Strait collected his third graded stakes victory for owner and breeder Cannon Thoroughbreds in the $202,000 Twilight Derby (G2T) Oct. 18 at Santa Anita Park, taking over the lead down the stretch and leaving a clear gap between himself and those closing from farther back. 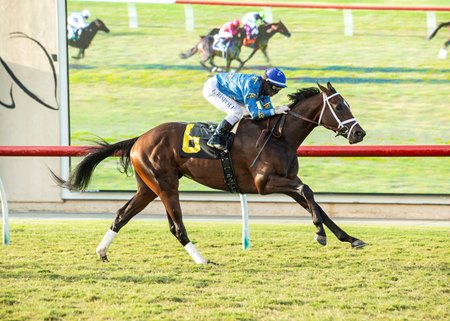 Shrugging off a fourth-place finish in the Sept. 5 American Turf Stakes Presented by Smithfield (G2T) at Churchill Downs, the Midnight Lute colt sat off fractions of :23.60, :47.84, and 1:11.74 through six furlongs. Jockey Umberto Rispoli was aboard Smooth Like Strait, the 6-5 favorite, and spotted longshot pacesetter Dominant Soul two lengths a half-mile in. That margin was down to a half-length by three-quarters with Smooth Like Strait ready to pounce.

“I was a little disappointed in the way he ran at Churchill Downs,” trainer Michael McCarthy said. “I didn’t think there was a horse around that could beat him that day. Things just didn’t unfold the way we would have liked. We got a little softer turf course than I would have liked, and we got a little bit of a speed duel.

“This horse has come back, and he has not disappointed since we’ve been back. I was a little skeptical about a mile and an eighth, but he won going a mile and sixteenth in the La Jolla Handicap (G3T) very well. All the stars aligned today. He brought his ‘A’ game. Umberto rode him like the leading rider he is. I’m very happy for the Cannons and everybody involved, even my groom Mike Munoz and Cleo Thomas. They do an excellent job with this horse, so a lot of credit goes to those guys.”

Scarto, who raced in fourth and dropped to sixth after being steadied at the nine-sixteenths pole, rallied for second, three-quarters of a length ahead of Field Pass in third. Kiss Today finished fourth.

“I studied the race yesterday and this morning because I really wanted to win,” Rispoli said. “The horse is actually really improving himself. We know how he could be keen in the first part of the race, but Michael does such an amazing job, he’s been relaxed. You can see him behind horses now, and he really understands to be there to be calm. Even when the horses reached me at the three-eighth pole, I thought about what to do. ‘Am I going to go, or stay?’ I just put the gears in, and then we went. At the top of the straight, I knew I had the race in my hand.”

Smooth Like Strait was produced from the Flower Alley mare Smooth as Usual, who has a yearling filly by Temple City and another weanling colt by Midnight Lute. She was reported bred this year to Nyquist.

https://columbianafarm.com/wp-content/uploads/2016/12/columbiana-logo.png 0 0 none https://columbianafarm.com/wp-content/uploads/2016/12/columbiana-logo.png none2020-10-19 12:36:562020-10-19 12:36:56Smooth Like Strait Pulls Clear in Twilight Derby
Columbiana Farm Consignment to the Keeneland November SaleColumbiana Farm Consignment to the Keeneland January 2021 Sale
Scroll to top