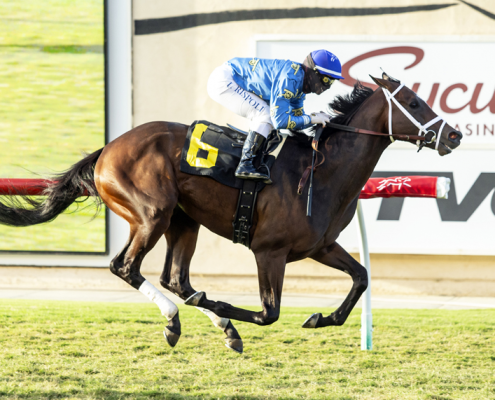 Trainer Mike McCarthy said he was pleased with the effort.

“The race unfolded like it looked on paper. I thought Umberto did a wonderful job of getting him out in the clear on the first turn. When that horse came up outside of him on the backside, it was something we’re not used to. But Umberto was very cool, didn’t panic, did the right thing, and knew he was on the best horse today,” McCarthy said. “When the other horse went ahead, it didn’t bother me because I knew we were still travelling well in hand. When we reengaged and got a half a length ahead, I was just happy to see no one was coming from behind.”

While Smooth Like Strait entered the La Jolla off a victory on Churchill Downs’ turf in the May 23 War Chant Stakes, Sunday’s 1 1/16-mile event for 3-year-olds marked the grass debut of 2019 champion 2-year-old male Storm the Court, the runner-up as the co-highweight.

The 4-5 favorite, Smooth Like Strait took command to open with a :23.58 quarter-mile. Indian Peak bid outside the leader in second and moved up to lead a half-mile in :46.78 but lost his advantage just past the three-eighths pole. Six furlongs went in 1:10.47 as Smooth Like Strait regained the lead.

Smooth Like Strait began to open up down the stretch, and Storm the Court, third on the inside, began to give chase. K P All Systems Go showed a strong late rally, but the winner had no threat at the wire. Smooth Like Strait won by 2 1/2 lengths in 1:40.29 on firm turf.

“I knew I had the most speed. Mike told me to ride like I was on the best horse. When you hear that, you have confidence,” Rispoli said. “When Mike Smith’s horse (Indian Peak) came up outside me on the backstretch, that was OK. It wasn’t a worry. My horse was relaxed, so we were just helping each other. Then he had good speed at the end, and we were gone.

“I like this place and I like racing in California. There’s good competition here. We go against each other and make each other better. It’s good.”

Storm the Court held for second by a head, and K P All Systems Go closed for third. Kanderel, Azul Coast, I’m Leaving You, Ajourneytofreedom, and Indian Peak completed the order of finish.

The reigning champion juvenile capped last season with an upset victory in the TVG Breeders’ Cup Juvenile (G1). He is winless in five starts at 3 but placed in the March 7 San Felipe Stakes (G2) and June 27 Ohio Derby (G3).

Bred in Kentucky, Smooth Like Strait is by Midnight Lute and out of the Flower Alley mare Smooth as Usual, who has a yearling Temple City filly and produced a full brother to Smooth Like Strait Feb. 24. He first made the grade in the Dec. 1 Cecille B. DeMille Stakes (G3T), also at Del Mar, after breaking his maiden. In eight starts, he has earned $253,323 and has a 4-1-1 record.