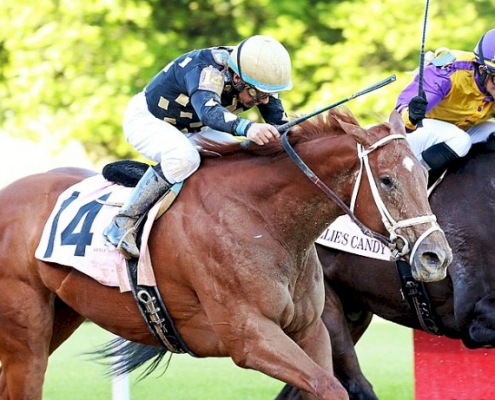 A month after staking her claim as the best distaffer on the West Coast with a victory in the Beholder Mile Stakes (G1) at Santa Anita Park, Bo Hirsch’s Ce Ce is showing her brilliance extends beyond California.

Traveling to Arkansas for the $600,000 Apple Blossom Handicap (G1) at Oaklawn Park, the 4-year-old Elusive Quality filly defeated a star-studded group that included nine other graded stakes winners, four at the grade 1 level, including runner-up Ollie’s Candy. Plus, she did it from post 14 in a 1 1/16-mile race with a short run to the first of two turns.

Following a sharp break and with an assist from several rivals, who sped off to go a demanding pace, Ce Ce made her outside draw seem like a mild hindrance. She was able to duck in behind the leaders in fifth, only about three wide into the first turn under Hall of Fame jockey Victor Espinoza.

In fifth she remained down the backstretch as Ollie’s Candy out-sprinted Cookie Dough and Serengeti Empress to the lead with a half-mile in :45.51. Then, on the second turn, the leader spurted away from her pace-chasing rivals, going six furlongs in 1:10.27, only now it was Ce Ce who loomed a danger. Advancing in the three path, she began to close the gap.

Ollie’s Candy would not yield easily, holding Ce Ce at bay for much of the stretch. But once Espinoza asked Ce Ce for all she had, she was able to muster the necessary late finish to win by a head. The Michael McCarthy trainee finished in 1:43.14 on a fast track, paying $9.80.

“I hit the first turn three or four wide, and it was perfect,” Espinoza said. “I was smiling because it was exactly what I wanted. Down the backside, I had to put her in the race because I didn’t want the speed to get away from me. At the three-eighths, I put her behind the speed and just waited. Turning for home, I was just loaded. It’s always fun to ride horses like Ce Ce. She’s an amazing filly.”

Her victory gave Espinoza his second win in the Apple Blossom. He won it in 2017 aboard 5-year-old Stellar Wind, a champion at 3.

McCarthy said the race unfolded differently than he expected when Longines Kentucky Oaks (G1) winner and favorite Serengeti Empress was unable to take the lead. Then when the frontrunners strung out the pack, with Ce Ce well positioned in the first flight of chasers, five lengths off the pace, he began to gain confidence in his filly.

“We were able to sit in a perfect spot,” he said.

He praised the effort of the rail-drawn Ollie’s Candy, a fellow Californian who had been third to Ce Ce in the Beholder Mile.

“It was a race neither deserved to lose,” he said of the Apple Blossom battle.

“I’m thrilled. I thought she ran great,” said her trainer, John Sadler. “The instructions to (jockey) Joel (Rosario) were to just not waste the post. His hands weren’t tied. He did what he had to do to get into position. I was a little surprised they went that fast, but I’m very pleased with the effort.”

Ce Ce, bred in Kentucky, is a product of Bo Hirsch’s breeding and racing program. Her dam, 20-year-old Miss Houdini (by Belong to Me), won the Del Mar Debutante Stakes (G1) in 2002 for trainer Warren Stute and has produced three other black-type runners, including two-time graded stakes winner Papa Clem (by Smart Strike).

Papa Clem also shined at Oaklawn, winning the Arkansas Derby in 2009 for Gary Stute. He was fourth in the Kentucky Derby (G1) at Churchill Downs behind upset winner Mine That Bird.

“It really speaks to their breeding operation,” McCarthy said of the family’s success.