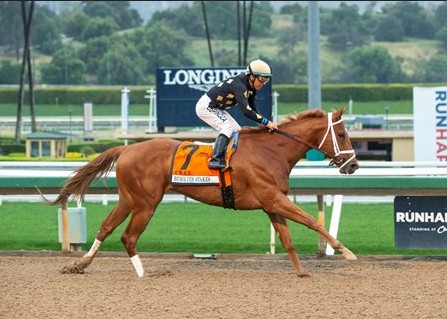 The Elusive Quality filly moved up steadily to challenge 3-5 favorite Hard Not to Love off the turn for home and put her away en route to a 3 1/4-length victory under Victor Espinoza. The final time was 1:37.33 on a fast track.

“She could be the best I’ve ever had,” Hirsch said. “She’s a half sister to (multiple grade 2 winner) Papa Clem, and we’re very proud of her mother, Miss Houdini, who is (20) years old today and still going strong.

“I am just so excited today. We came out here because we had to find a race to run this filly in, and I said let’s take our shot with nothing else for her to get to the next level, and she beat all our expectations. I thought it might be a little tough to win this one today. I am pleasantly surprised.”

Trained by Michael McCarthy and sent off at odds of 4-1 in a six-horse field for just her fifth start, Ce Ce was making her second outing of the season on the heels of a 4 1/4-length allowance-level score going 6 1/2 furlongs Feb. 17 at Santa Anita. She went to the sideline after a fourth in the June 8 Acorn Stakes (G1) at Belmont Park and is now 2-for-2 off the layup.

“I’ve always thought she was really good,” McCarthy said. “Last spring, I thought she could beat any kind. Unfortunately, she got hurt after the Acorn, which made us take a step back and take some time off. She has come back and hasn’t missed a beat.

“I can’t thank Bo (Hirsh) enough for letting us take our time and pick our spots. I kind of wanted to wait for Keeneland, but I’m glad we didn’t after today’s result.” 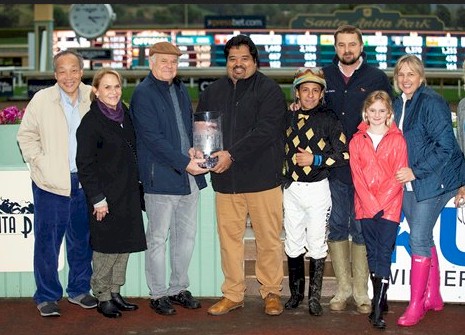 Breaking from the far outside in a field of six older fillies and mares, Ce Ce had one horse beat and was four wide into the clubhouse turn. Hard Not to Love, the one-eyed filly who came off wins in a pair of graded stakes at seven furlongs and was riding a three-race winning streak, set fractions of :22.63, :45.72, and 1:10.36 before Ce Ce ran her down through seven-eighths in 1:23.25.

“I wanted to make the leader work a little bit at the three-eighths, so I let my filly go a little,” Espinoza said. “Down the lane, she was in control.

“She’s come back better than ever. She ran against some of the best fillies in the world (in the Acorn), and she ran just like she ran the other day.”

Hard Not to Love held for second, 3 3/4 lengths in front of Ollie’s Candy.

Ce Ce paid $10.40 on a $2 win ticket. Bred in Kentucky out of Hirsh’s grade 1-winning Belong to Me mare Miss Houdini, Ce Ce collected her first stakes win and boosted her earnings to $366,600. She now has three wins and a second from five starts.