Anderson Stables runner took July 13 Sanford Stakes (G3) at Saratoga Race Course.
By Claire Crosby
Saratoga Springs, NY (July 13, 2019)-After tracking the pace through early fractions of :22.60 and :46.19, By Your Side responded when asked through five-eighths in :58.07 and drew clear to a three-length victory. He finished the six-furlong test in 1:10.22 on a fast track. 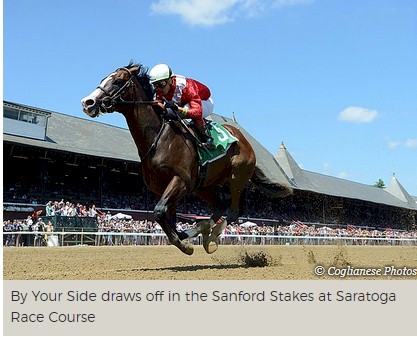 “I got a perfect trip,” Ortiz said. “I had the outside post, and he put me in a good spot early. He broke good on top. The speed went, and he was second. He was acting like a professional. He relaxed so well, and when I asked him to go, he just turned on.”

Tomato Bill held for second, and Raging Whiskey was third. After a stewards’ inquiry into the stretch run and a jockey’s objection from Javier Castellano aboard Raging Whiskey against Kendrick Carmouche on Tomato Bill, the stewards allowed the result to stand.

By Your Side returned $4.80, $3.20, and $2.30 as the 7-5 choice in a five-horse field. He was bred in Kentucky by Columbiana Farm out of the Dixie Union mare Revered and was a $240,000 purchase by Brad Anderson from Columbiana’s consignment to the 2018 Keeneland September Yearling Sale.

“He’s shown that he’s the real deal for a while,” Kenneally said. “He’s a very professional horse. He just does everything right and relaxed nicely after breaking quick. Irad allowed the speed horse to go on out, and the horse was content to relax on the outside. Perfect position, beautiful ride. He’s good but might be even better going long.

“He came to me at Keeneland in April and just continued on from there. He never did anything wrong. He has a very efficient, long stride, and his pedigree says that he wants to go longer. The way he relaxed will help the horse go longer as well.”

https://columbianafarm.com/wp-content/uploads/2016/12/columbiana-logo.png 0 0 none https://columbianafarm.com/wp-content/uploads/2016/12/columbiana-logo.png none2019-07-13 20:10:512019-07-13 20:10:51By Your Side First Black-Type Winner for Constitution
Rated R Superstar Nails Snapper Sinclair In Essex PhotoColumbiana Farm LLC Consignment to the 2019 Keeneland September Sale
Scroll to top