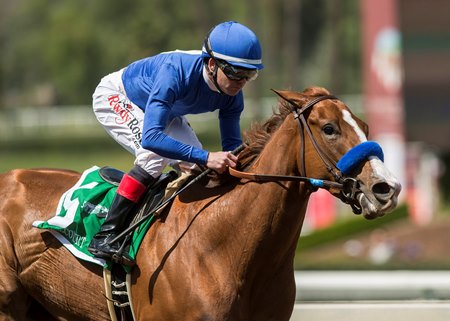 Aided by a slow break from potential early challengers Paradise Woods (a dual grade 1 winner) and Marley’s Freedom, Selcourt shot to an easy lead and set fractions of :22.85 and :45.13 through a half-mile.

Paradise Woods got up into contention soon enough after her poor break and stalked the pacesetter about a length behind through much of the backstretch, but her challenge in the turn was short-lived. Selcourt shrugged off her rival when Paradise Woods attempted to move alongside in the bend and kicked away from the field in the stretch to win by 4 1/2 lengths.

“She’s been great all winter, going up the ranks and stepping up to the challenge,” said winning trainer John Sadler. “She got some soft splits early (today), but she kicked home so well. That’s what makes it so impressive—that final time on a drying-out kind of track.”

Selcourt, who won her debut in February of 2017 and placed in two stakes before she got an eight-month layoff, is now undefeated in three 2018 starts. She kicked off her 4-year-old campaign with a 7 1/2-length victory in the 6 1/2-furlong Kalookan Queen Stakes and earned her first graded win in the six-furlong Las Flores (G3) Feb. 18.

“This filly is scary good right now, and she’s getting better and better,” said jockey Tyler Baze, who has ridden Selcourt in all six of her starts. “She broke really sharply, and she was relaxed underneath me. Coming around the turn, when it was time to go, she took off.”

Sadler said after the race Selcourt could continue to rise up the class ladder and try a grade 1 next time out.

“We’ve got the Humana Distaff (G1, May 5 at Churchill Downs) maybe next, or maybe the Beholder Mile (G1, at Santa Anita June 2) at the end of the meet here, but no immediate plans,” the trainer said. “She’s had three good races already. There’s one step left, which is to go for the grade 1, so we’ll look around and see what’s available.”

Born and raised for breeder Abrahams at Columbiana Farm Paris, Kentucky she is out of the Open Forum mare Azure Spring, Selcourt has a 4-1-1 record with $283,920 in earnings.