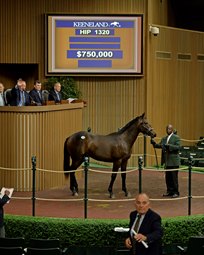 By Ron Mitchell
Lexington, KY (September 20, 2016)-The sale of an Uncle Mo colt for $750,000 to top the Sept. 17 session of the Keeneland September yearling sale was the high water mark for the Columbiana Farm of Mr. and Mrs. Robert Ochocki.

Located on 385 acres of lush Central Kentucky farmland near Paris, Ky., Columbiana was initially established as a 50-acre operation in Riverside, Calif., by Ochocki, a retired pharmacist. Under the guidance of Kathy Berkey, who has assisted Ochocki since 1981, the farm was relocated to Kentucky when the owner purchased the former Rockburn Farm property of the Hardin family of Newstead Farm fame.

The colt, produced from the stakes-placed Victory Gallop mare Magical Victory and from the family of millionaire and sire Papa Clem, was purchased by Lane’s End. Miss Houdini, the colt’s second dam, produced Papa Clem, the 2009 Arkansas Derby (gr. II) winner, and is granddam of stakes winner Ready Intaglio. The third dam is the grade I winner Magical Maiden.

“He’s a really nice colt,” said Lane’s End’s Bill Farish. “We knew he was going to be one of the feature lots of the day, and we went a little further than we wanted, but we got him.”

The colt was consigned on behalf of Bo Hirsch, a Southern California horseman who primarily breeds to race, but sold the colt in order to satisfy Internal Revenue Service regulations that require such operations to generate a profit. Berkey also represents Hirsch and formerly advised his late father, Clement L. Hirsch, the prominent California owner-breeder and a co-founder of the Oak Tree Racing Association.

In addition to the colt, during the same session Columbiana was represented by an Into Mischief   filly sold to Spendthrift Farm for $425,000, the highest price at public auction for a horse bred by the farm.

“It is a pat on the back for Columbiana and satisfies a tax problem for Bo,” Berkey said of the farm’s success at the September sale. “We are going to continue to do what we do and are not going to go out and try to expand. It is nice to see that small consignors like us and Clarkland (which sold the sale-topping Scat Daddy colt who is a half brother to champion Beholder and Into Mischief for $3 million) can top the sale.”

Farm manager Homer Rader, who has been associated with Columbiana since 1995, said the farm generally has a broodmare population of 65-70, about a dozen of which are owned by the Ochockis, growing to some 125 mares during the breeding season.

Berkey, who represents other prominent clients, said Columbiana’s business model is to purchase young mares that have a lot of upside, a criteria she learned from her association with prominent California agent Rollin Baugh.

“He taught me to place yourself where luck runs over you,” said Berkey. “We generally try to buy young mares with a lot going for them. We like bigger, scopier mares, and try to find correct mares that can be bred to correct stallions.”

Columbiana hopes its 2016 Keeneland yearlings join the more than 50 stakes horses—including grade I winners Taste of Paradise, Snow Ridge, Miss Houdini, Salty You, and My Sweet Addiction—that have been bred, raised, or sold by the farm.